NOTICE: Our office is open for business following CDC and state guidelines. Remember, you use more fuel when you're home. Be sure to keep an eye on your tank's gauge and give us a call when it reaches 25%. Don't be caught off guard!

Propane is a safe, cost-efficient fuel that has been part of America’s energy mix for more than a century.

Millions of U.S. households and businesses rely on propane – also known as LPG for liquified petroleum gas – for water and space heating, indoor and outdoor cooking, clothes drying and backup power. In addition, more and more industries are turning to propane to cost-effectively fuel their vehicles, forklifts and other equipment, while also lowering emissions.

Here are some reasons America is choosing propane:

How Are U.S. Consumers Using Propane? 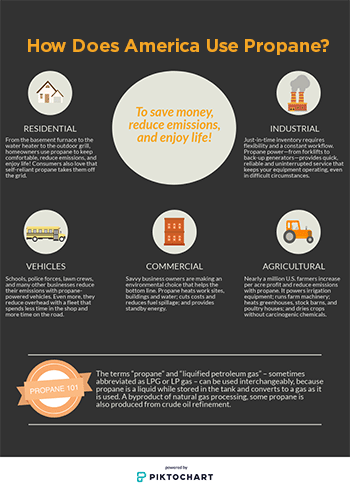 Clean-burning propane appliances waste very little fuel in the combustion process, unlike electric-powered appliances, which are less efficient. For example:

*According to the Propane Education & Research Council’s report from 2012.

Reduce costs and emissions at your hotel or resort

See how propane reduces emissions through these four infographics: